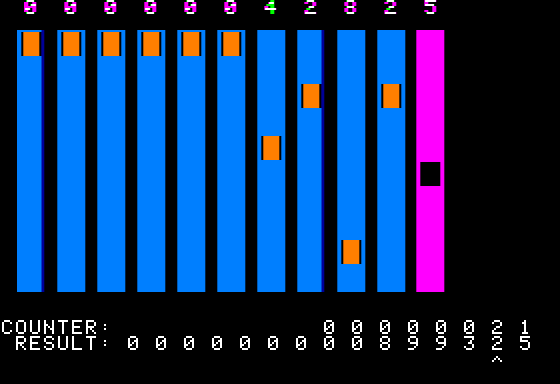 This is a simulation of the Curta mechanical calculator written for the Apple //.

A Curta looks somewhat like a pepper grinder. To replace the crank, this simulation uses a joystick.

The primary interaction is performed by “cranking” the joystick through 360 degrees. To perform a crank, start with the joystick centered. Pull the joystick towards you and then crank around a circle clockwise until it is again pulled towards you. Then release the joystick back to the centre position.

The joystick operations are:

These keyboard commands can be used:

Imagine you want to multiply 123 by 990. Perform a clear operation if result is not zero. Use Left/Right/Up/Down operations to put 123 in the operand. Hold button 0 down and perform Left/Right moves to get the carriage pointing to the thousands position in the result.

If you want more information about how to use a Curta, check out these Curta manuals